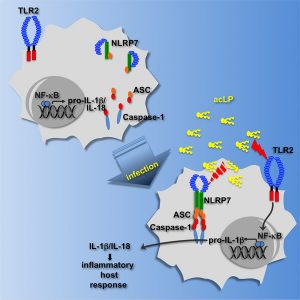 By RNAi screen, we discovered the NLRP7 inflammasome in human macrophages. NLRP7 senses bacterial acylated lipopeptides, which requires its LRRs and is crucial in eliminating infection by Gram positive bacteria, including Staphylococcus aureus and Listeria monocytogenes and Mycoplasma spp. Upon lipopetide sensing, NLRP7 oligomerizes and assembles an ASC and caspase-1-containing inflammasome, resulting in maturation of IL-1b and IL-18.

NLRP7 oligomerization is mediated by its NACHT domain and requires ATP binding and hydrolysis. NLRP7 functions in collaboration with TLR2, where TLR2 is necessary for inflammasome priming and NLRP7 for caspase-1 activation and cytokine release. NLRP7 is one of the NLRs encoded in humans, but not in mice.

Hereditary mutations in NLRP7 are linked to hydatidiform mole (HM), which is a form of trophoblastic neoplasia characterized by cystic degeneration of the chorionic villi and abnormal or lack of embryonic growth and eventually develops into gestational choriocarcinoma, a highly aggressive cancer. We demonstrated that several common HM-linked NLRP7 mutations show hyperactive inflammasome activation, raising the possibility that these mutations represent gain-of-function and that excessive inflammation may contribute to HM. Studies to dissect the mechanism of NLRP7 inflammasome activation, function and signaling during inflammation and microbial infection are ongoing. 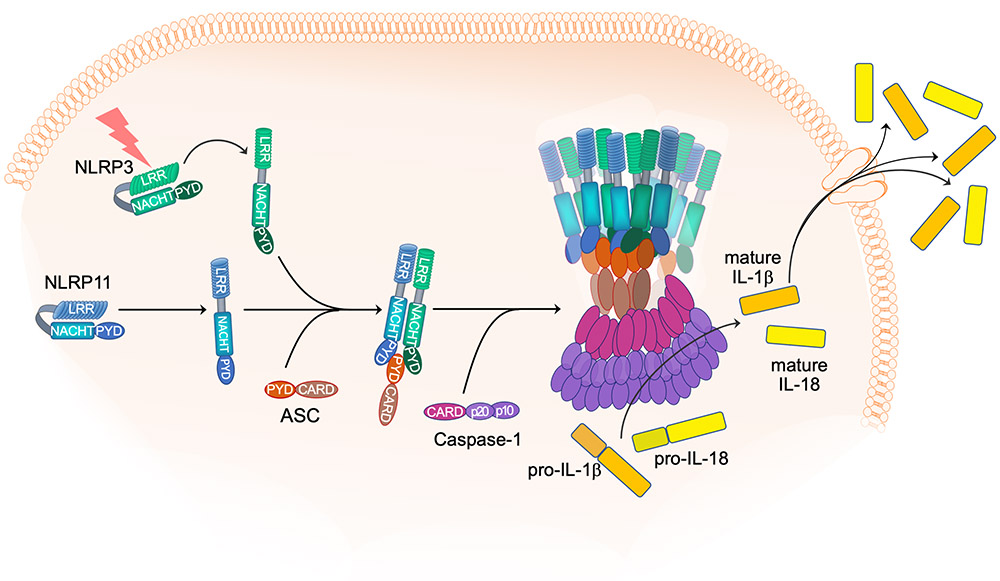